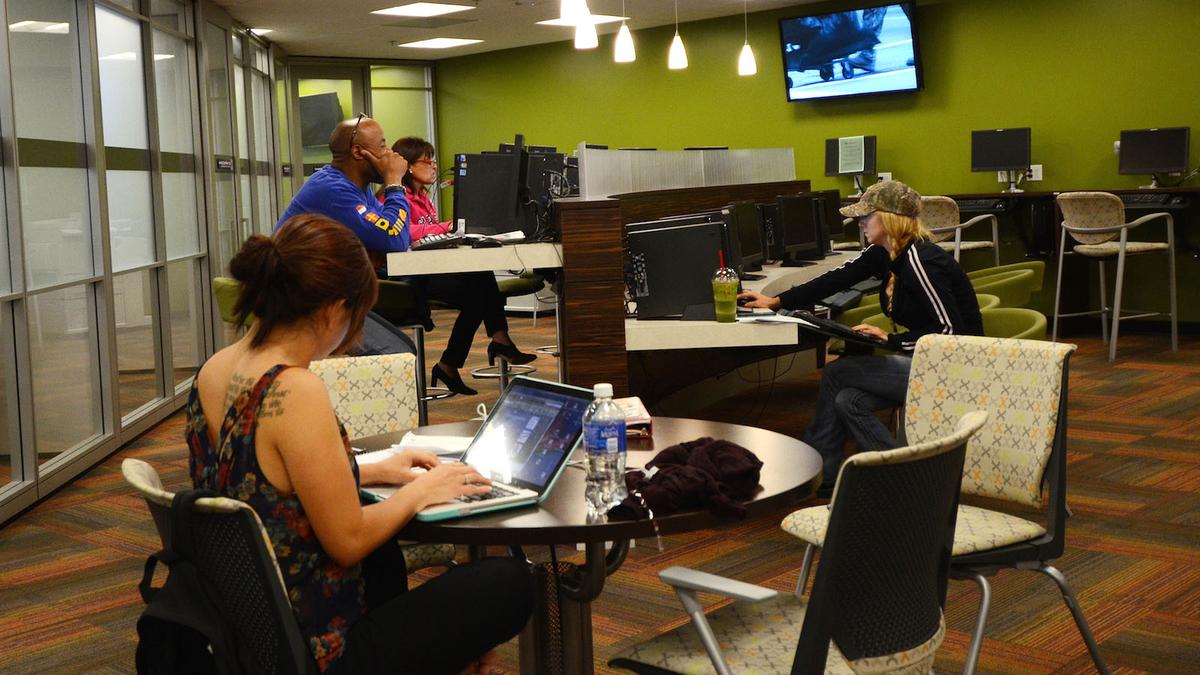 Students work at the resource center at the University of Phoenix, San Diego. The college disputes that some programs violated a GI Bill funding rule.

California regulators have barred the University of Phoenix from enrolling veterans in seven popular programs at its San Diego campus.

The action came after auditors found the for-profit college had violated a decades-old rule to prevent the improper targeting of veterans. The state order covers four undergraduate programs and three master’s programs, including those in management, Web development and criminology.

A copy of the state inspectors’ report, obtained by The Center for Investigative Reporting through the California Public Records Act, shows the University of Phoenix ran afoul of the 85/15 rule, which prohibits schools from accepting GI Bill funds for academic programs in which more than 85 percent of students are receiving the benefit.

“This rule is designed to prevent opportunists and fly-by-night schools from targeting veterans,” said James Vanderbilt, education administrator for the state Department of Veterans Affairs, which issued the report Friday.

The document is the result of a May 2 inspection of the campus that CIR witnessed during its investigation into for-profit colleges’ use of the GI Bill. CIR revealed that the University of Phoenix’s San Diego campus has received $95 million from the post-9/11 GI Bill since 2009 – more than any other brick-and-mortar campus in America. The school’s overall graduation rate is under 15 percent, according to the U.S. Department of Education, and more than a quarter of students there default on loans within three years of leaving school.

The federal 85/15 rule dates back to the Korean War, enacted after lawmakers became concerned that trade schools were designing programs to improperly profit from the GI Bill benefit that followed World War II.

Vanderbilt said that after ordering the University of Phoenix to stop enrolling veterans in the seven programs, his office referred the matter to the U.S. Department of Veterans Affairs.

He also said the University of Phoenix is complying with the audit’s findings, and he anticipates the school will be allowed to resume enrolling veterans in those programs by early September.

Representatives of the federal VA did not respond to requests for comment.

Mark Brenner, a senior vice president at the University of Phoenix’s parent company, the Apollo Education Group, told CIR via email that it was “in possession of a limited set” of documents and disputed “any and all inaccurate claims that our institution of higher education has multiple academic programs in violation of the 85/15 rule.”

Brenner added that the University of Phoenix would “vigorously dispute any claims that we have been instructed to cease enrolling students.”

In interviews for CIR’s June 28 story, the University of Phoenix argued that the large proportion of veterans enrolled at the campus reflects its popularity with them. The state’s audit found that 2,915 of the San Diego campus’s students – 55 percent – were supported by the GI Bill, which pays up to $19,000 a year.

During a 40-minute interview with CIR, the school’s national vice president for military affairs, Garland Williams, used the word “choose” or “choice” 16 times in response to a variety of questions.

The 85/15 rule is among a handful of restrictions governing funding from the GI Bill.

Schools receiving taxpayer dollars to educate Iraq and Afghanistan veterans aren’t required to be accredited or report how many veterans graduate or find jobs.

And money from the GI Bill doesn’t count toward another federal regulation, the 90/10 rule, which bars for-profit schools from receiving government funding if they draw more than 90 percent of their revenue from federal student aid programs.

Earlier this month, legislation designed to close that loophole died within 15 minutes of being introduced.

Still, veterans’ advocates said they were encouraged by the state regulators’ action at the University of Phoenix’s San Diego campus.

Enforcing the 85/15 rule “forces schools like the University of Phoenix to compete in an open marketplace for individuals who will actually be paying their own way,” said Robert Muth, who runs a legal clinic at the University of San Diego that helps veterans, including those who believe they were defrauded by for-profit schools.

“It’s great to see that they are serious about protecting veterans,” said Muth, an Iraq War veteran and former judge advocate in the Marine Corps. “I hope that they continue to do so.”

This story was edited by Amy Pyle and copy edited by Nikki Frick and Christine Lee.

By Aaron Glantz Reveal from The Center for Investigative Reporting July 30, 2014